The live cam at Tidal Basin captures cherry blossoms around the dam in all their beauty. Washington D.C. received this impressive gift from Japan as a symbol of growing friendship between the USA and Japan. On the Cherry Blossoms webcam, you can see crowds of people taking a walk alongside the Tidal Basin.

Watch the lives of two eagles - male Justice and female Liberty - directly from their nest located on an oak tree next to Metropolitan Police Academy. The oldest eagle nest live cam in Washington, D.C. is run by Earth Conservation Corps and Metropolitan Police Department. The broadcast from eagle nest webcam is in HD quality and offers interesting shots of the natural behavior of both eagles. 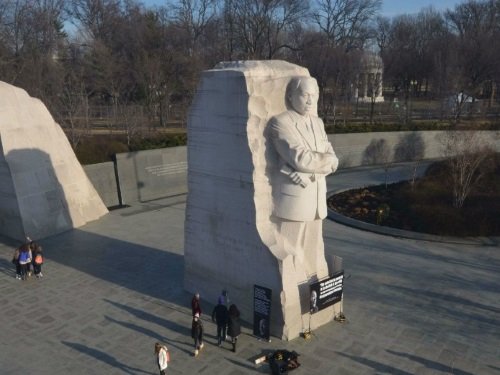 Take a look at the Martin Luther King Jr. Memorial live cam located in West Potomac Park in Washington, D.C. next to National Mall. The recording in HD quality offers a detailed view of the Stone of Hope, a symbol of freedom, equality, justice and love.

Enjoy the view from Smithsonian Castle’s North Flag Tower to National Mall in Washington, D.C. The webcam captures the process of revitalization and offers shots of many important places in Washington, D.C. You can see for example the Washington Monument or the US Capitol Building. It is not possible to control the National Mall live cam so you have to wait for the individual shots. You can look at the static images in the archive.

Take a look at the osprey nest under the Frederick Douglass Bridge in Washington, D.C. The osprey nest live cam located at Anacostia River captures the life of several individuals. It is run by Earth Conservation Corps.

Take a look at Washington, D.C. National Mall and its surroundings including the descriptions of important places via the Smithsonian Castle’s panoramic cam, which captures everything from Washington Monument to the US Capitol Building. It is not a live stream.

The static panoramic cam at the Thomas Jefferson Memorial in Washington, D.C. displays in detail the building and its surroundings. If you zoom in the picture you can see several National Mall memorials. On the right side of the picture, there is the Washington Monument.

Take a look from the 500 feet tall Washington Monument to Lincoln Memorial. The Washington Monument live cam offers a panoramic view of the western part of Washington, D.C. You can see the World War II Memorial, Reflecting Pool and Martin Luther King Jr. Memorial in the picture.